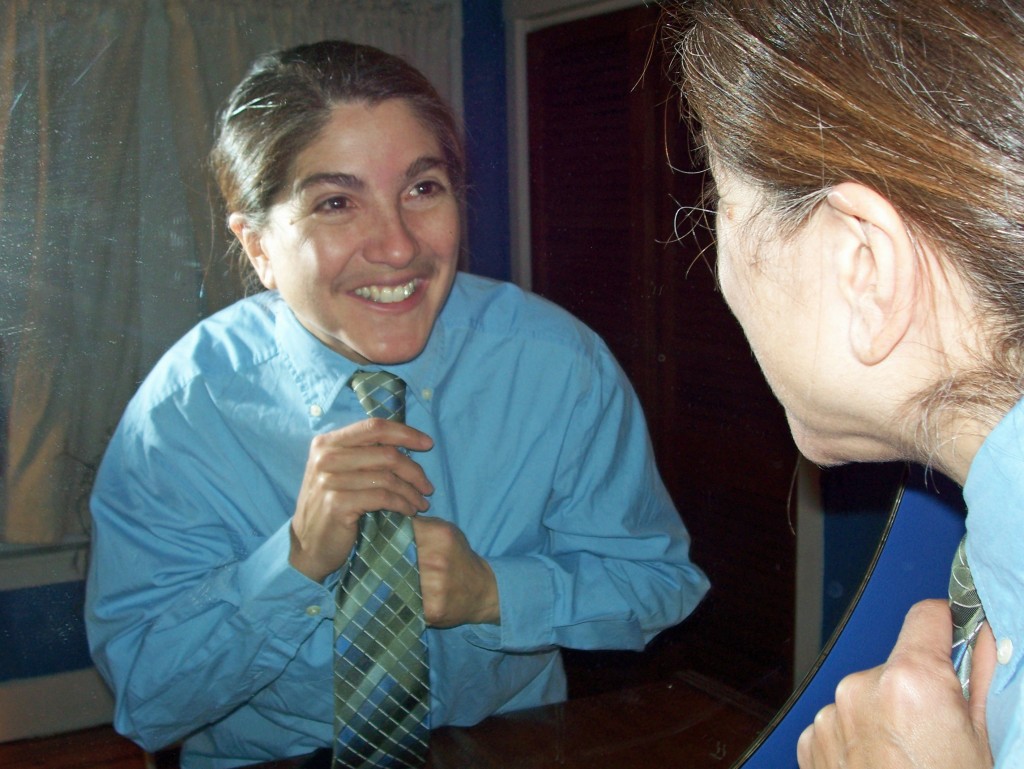 Three years ago, when a childhood friend came out as transgender to Janis Astor del Valle, the New Haven-based, award-winning writer-performer found herself at odds with herself. “Here I was, an out and proud Latina lesbian, whose own coming out process had been marked by sheer angst; yet, when my friend Derek told me he was transgender, I’m ashamed to say, I freaked out. Not outwardly, because I didn’t want to make him feel bad, but inside, I felt devastated.”

“I’d always thought of myself as so liberal, so progressive. I lived in New York City for 20 years, and for part of that time, I was an activist, Vice-President for the LGBT group, PRIDE (Puerto Rican Initiative to Develop Empowerment). I worked and marched alongside many transgendered comrades. But when Derek came out, I really could not comprehend why he wanted to change his body, his gender. We had known each other since second grade. All our lives I knew him as a girl, and we both came out as lesbians in our early 20’s.”

Why was it so difficult for Astor to accept her lifelong friend as transgender? “I couldn’t figure it out at the time, but I’ve since determined much of my initial difficulty had to do with my own ignorance. I think, to some extent – and I know this is going to sound crazy – I felt a sense of betrayal. As adults, we had bonded as lesbians, members of an oppressed group, but now he was going to have a straight man’s identity and privilege.”

The more Astor talked to Derek, the more plagued with guilt she became, until she realized “I had to get over myself – this wasn’t about me, it was about him, he needed my support.” The problem was that she didn’t know how to overcome her fears and prejudices. So, she turned to what she did know: theater. “Writing has always been like therapy for me, helping me to sort out and work through problems or issues. And acting, to me, is about empathizing, learning to step into the shoes of another, in order to truly understand the person.”

Inspired by Derek’s courage and determination, Astor decided to create a Latina lesbian character who transitioned into a man. The first thing she did was talk to Derek. “I explained that I wanted to honor his journey, and respect his privacy; I didn’t want him or anyone to think I was telling his story, or anyone’s specific story. I just wanted to be truthful to the experience of being transgender and create a character with whom audiences could truly empathize, even if they weren’t themselves transgender, or Latino.” Her inspiration intensified, and she began writing a monologue entitled Passing, about the character of Joaquin, a transgender Latino who sheds his female and lesbian identity, yet struggles to gain acceptance from his family and himself. Astor felt herself turning a corner on the road to shedding her own transphobia.

Astor began conducting research, and uncovered alarming statistics pertaining to the transgender community. “Reading all this information was pretty depressing and infuriating, because I believe the numbers are even higher, but, historically, hate crimes have not accurately been reported by the authorities or tracked by the FBI. All in all, it fueled my fire to finish writing the play,” says Astor.

Has the research and writing process helped Astor overcome her transphobia? “Absolutely!” she exclaims. “But, I think, more than that, it’s just been the whole process of talking with Derek, coming to understand that he has felt this way his whole life. And he’s still the same lovable, good-hearted, funny person he’s always been.”

Astor was awarded an Aurand Harris Fellowship from the Children’s Theatre Foundation of America to develop her original monologue into a one-woman play, Becoming Joaquin, in which she portrays the title character, his family members and girlfriend, who are in therapy, struggling to accept his identity as a transgendered Latino.  Integrating various elements of her research, Astor completed the play last month. She aims to tour the piece to schools and other venues, to educate others about the transgender experience and encourage acceptance.

Playwright, instructor and performer Janis Astor del Valle has written two plays about being lesbian and Latina, Trans Plantations and Pandora’s (which has been performed Off-Broadway. Becoming Joaquin, written and performed by Astor del Valle, is a one-person play about the experience of being a transgendered Latino.  The performance will be followed by a talk with Astor. Astor believes her play “offers an excellent opportunity to bring together diverse groups to spark meaningful discourse about identity and foster understanding of the transgender experience,” Becoming Joaquin is a don’t-miss event.
Call 860-685-7871 to reserve your seat.